The European Council as manager of crises

Today I would reflect on my very many years covering European Council summits. My arrival in Brussels in 1975 coincided with the start of the European Council. Since then the Heads of State or Government had more than two hundred meetings. Over the years I have covered most of these meetings in Brussels or in another city. I remember important summits in for instance Finnish Tampere, in (very hot) Spanish Sevilla and the Venetian Lagoon in the north of Italy.

My first point is what the European Council distinguish from other Summits?

I discovered the special character of the European Council comparing my coverage of the prestigious summits of NATO and those of the EU. Summits of the leaders of the NATO member states finish at the announced time. So the announced 6 p.m. final press conference is indeed sharp at six. As an exception I remember the lengthy NATO Summit in Bucharest in 2008 due to long winding discussions regarding a future membership of Ukraine and Georgia. But this was indeed an exception. The final press conference of the recent December European Council was announced for 7.30 p.m. In reality the meeting ended 3,5 hours later. I remember very well that most meetings involve negotiations into the early morning hours. Meetings in June in my memory finish under a rising sun!

The reason for the delay is always the same. A European Council meeting is characterised by time-consuming, in some cases quarrelsome, negotiations between the leaders in the EU. Whereas at NATO the Final Communiqué is already agreed beforehand. So real negotiations are an important element of every meeting of the European Council.

With reference to my speaking limits, I would like to refer to 5 reference points. Crisis here to be defined as a real and long-lasting risk for the good functioning of the Union.

Between the start of the former European Economic Community (EEC) in 1957 and the first European Council in 1975 in Dublin Castle, 9 European Summits have taken place. Nearly all these meetings were held against the background of a looming crisis. For example, the summits in The Hague in 1969 and in Copenhagen in 1973. The Hague has been described as ‘a response to the despair felt throughout Europe’ (Werts, 1992, p. 33). In The Hague, for this purpose the Calvinistic churches in the Netherlands held the Sunday before the summit a national prayer meeting!

Four years later, the summit in Copenhagen had to tackle different crises. These included the diminishing oil-supply after the Arab/Israeli War, an economic recession which worried populations as well as problems on the European side with the SALT-1 nuclear agreement between the USA and the Soviet-Union. In Copenhagen we even saw the arrival at the meeting place of the Foreign Affairs Ministers of Algeria, Egypt, Sudan and the United Emirates. Needless to say that this happened to general surprise and even consternation.

Crises triggered in 1974 the creation of a European Council

The European Council was created at an informal so-called ‘picnic Summit’ (a lunch) in the Palais de l'Élysée in Paris in December 1974 . I remember well that the EEC then was paralysed by a general crisis of decision-making. Especially the indecisiveness and wavering of the lower Council of Ministers lead to regular European Council meetings. So again, we see the recurrent element, namely 'crisis' as the main driving force.

Important summits frequently have to resolve a crisis

In my book of 2008 is an overview of the 14 most important Summits and European Council meetings since 1969. All these summits had to either deal with a crisis, or take a fundamental – sometimes even historic – decision for the future of the European Union. For example the famous budgetary agreement in the renaissance brilliance of Fontainebleau Palace in 1984. You possibly remember the United Kingdom´s triumphant ‘I want my money back’ of PM Margaret Thatcher. She here won her famous ‘rebate’ after a five year tug-of-war in the European Council.

Other important examples are the historic crisis meetings of November and December 1989 after the fall of the Berlin Wall. Here we saw disagreement between the traditional key-players in the European Council, France and Germany. Breaking points were: when and how would Germany be re-unified? What was in store for the Soviet Union? Would a united Germany be a member of NATO? How to organise the relationship with the countries in central and eastern Europe?

Chancellor Helmut Kohl was here confronted with reservations and even circumspection from the other national leaders. It appeared that they, with France (Mitterrand) and the UK (Thatcher) at the fore, were attempting to force the chancellor´s hand. The national leaders at these crisis meetings had no understanding of the very difficult position of the German chancellor.

Reportedly president Mitterrand threatened that France, the UK and the Soviet-Union would create a triple alliance against Germany which would culminate in a war if German unification was realised before further European integration (Wessels, quoting Attali, p. 51). So, the collapse of the Berlin Wall/Iron Curtain triggered the deepest crisis ever in the European Council in late 1989.

For a more recent example of a longer series of crisis meetings, one has to look at about 30 meetings held in order to save the Economic and Monetary Union. The survival of the common currency was at stake in the wake of the financial crisis in Greece in 2010. The European Council here became the gouvernement économique' of the Union. President Herman van Rompuy of the European Council at the time stated: Due to the crisis the European Council could take decisions which were ‘unthinkable’ beforehand”.

The need for Franco-German cooperation to finding a deal

As president Van Rompuy stated in 2012 at the height of the debt crisis, ‘co-responsibility hit the Union’s 27 Heads of State and Government in 2010 almost by surprise. Many of my colleagues would actually have been quite happy to take a less prominent role in solving this crisis!’ (Council EUCO 21/12, Presse 35). Later Van Rompuy remembered that the national leaders always were relieved when, at the start of the meeting, he could present a concept of a solution.

Franco-German cooperation is the yin and yang of the EU. So not surprisingly Van Rompuy furthermore concluded that in many cases the pre-agreement between Germany and France turned out to be the founding principle of political action by the Euro Summit, governing the euro area. We remember from these days the close relationship of President Sarkozy and Chancellor Merkel also known as ‘Merkozy’. My regular analyses learn that since the arrival of the weaker president François Hollande (2012) and later Donald Tusk as Van Rompuy’s successor , the European Council – and so the whole of the EU - is driven by chancellor Merkel in collaboration with Tusk.

Preferable the EU is based on the German-Franco couple because they together represent the northern and the southern school of thinking. Paris and Berlin think differently about Europe. France is on the line of the southern countries where compassion has more weight than the pursuit of competitiveness and fiscal orthodoxy. Germany and the other northern EU countries give more priority to the latter elements. Will the classical Franco-German parity after the upcoming presidential election in France be restored? That is an interesting question. 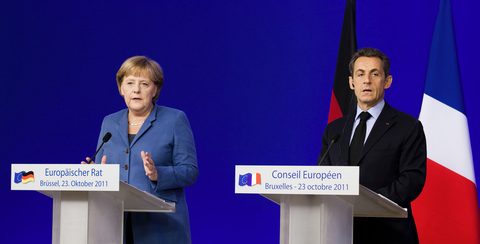 'Merkozy' has never been followed by 'Merkellande', photo courtesy of Council EU

Thorough preparation is crucial for finding a settlement

Experience has learned that systematic and detailed preparation is an absolute requirement for European Council meetings to succeed in a crisis situation. Obviously this is a task for the president. Pierre de Boissieu, famous former Secretary-General of the Council: “As the president has no executive powers and can never deliver on his own, he needs to work as a facilitator with authority to influence, encourage and cajole” (De Boissieu, p. 285).

Another important aspect is that leaders have to agree at just this meeting. Not helpful is it if the option of postponing decision-making is in the air. Chancellor Kohl´s warning from the Fontainebleau summit: ´Each of us must move´ is applicable for every meeting. This advice is especially imperative because today there must be consensus amongst 28 national leaders to an agreement plus the Commission President.

Finally a remark regarding the process of decision-making. It has been said that in the sovereign debt crises since 2010 the traditional Community Method of decision-making, with an important role for the Commission and the European Parliament, is abandoned. This method, however, can only be used in cases where the Union has the competence to act. National coordination is indispensable in areas with little competences for the Union such as the economic and financial crises. ‘That is why often the choice is not between the Community Method and the intergovernmental method, but between a coordinated European position and nothing at all’, (Van Rompuy, Council EU, The European Council in 2010, p. 16).

Due to the follow up of the euro area crises, the Commissions’ proposals under certain procedures now stand adopted, unless rejected by QMV in the Council of Ministers. The European Parliament played a role with the adoption of the Six-Pack and the Two-Pack regarding budgetary and macro-economic surveillance, the backbone of the reforms.

Concluding: even under the crises the EU remained the traditional mixture of the Community Method and the - indeed now strengthened - intergovernmentalism of the European Council/Euro Summit.

Although this task is not laid down in the Treaties, the European Council is constantly busy with crisis-management, nowadays under Chancellor Merkel’s leadership. Interesting is the question whether a restauration of the drained away classic Franco-German association after the French presidential elections is to expect.

How the EUCO manages crises, finally, is another story, which is not to explain in my speaking time. Very helpful here is the recent study by our discussant of today, Ralf Drachenberg c.s. of the European Parliamentary Research Service: The European Council and Crisis Management.

Not surprisingly my final conclusion is that crises are more or less the 'raison d' être' of the European Council.

WERTS, Jan, Eighty analyses regarding the European Council/Euro Summit meetings since 2009 in Dutch on http://www.montesquieu-instituut.nl/ and http://www.europa-nu.nl