In 2001, former High Representative for the Common Foreign and Security Policy (1999-2009), Javier Solana held the 9th Europe Lecture. He spoke about enlargement of the European Union. He was introduced by Dick Benschop. 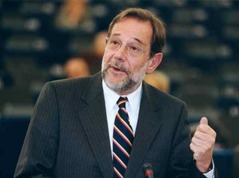 Javier Solana (1942) was Secretery-General of the Council of Ministers and High Representative for the Common Foreign and Security Policy of the EU from 1999 to 2009.

Prior to the office he held in the EU Solana was Secretary-General of the NATO. He was judged a quiet diplomat, working from behind-the-scenes. He received much criticism in his time as the EU's chief diplomat, not all of it legitimate. Similarly, he has received high praise as well.

"It is a privilege for me to be invited to deliver this year’s Europe lecture. I am grateful to Dick Benschop for his kind words of introduction. And our congratulations go to the winners of the Euro essay. It is also a particular pleasure for me to be back in the Netherlands.

I have been invited to address the issue of whether EU enlarg¬ement is an opportunity or a threat. To this my answer is clear and unequivocal. I regard it as a profound opportunity both for the exist¬ing Member States, for the candidate countries, and for those who will find themselves as neighbours of an enlarged Union.

Let me be clear at the outset: for me a European Union that does not include the countries of Central and Eastern Europe will be less stable and less secure. This evening I should like to develop the theme of why I consider enlargement to be such an opportunity.

Of course it will bring challenges with it as well. Not least the challenge of how to address some of the concerns of ordinary people about its effects on their lives. These will have to be faced. And I intend to cover these too. But I will leave plenty of time for you to ask questions."